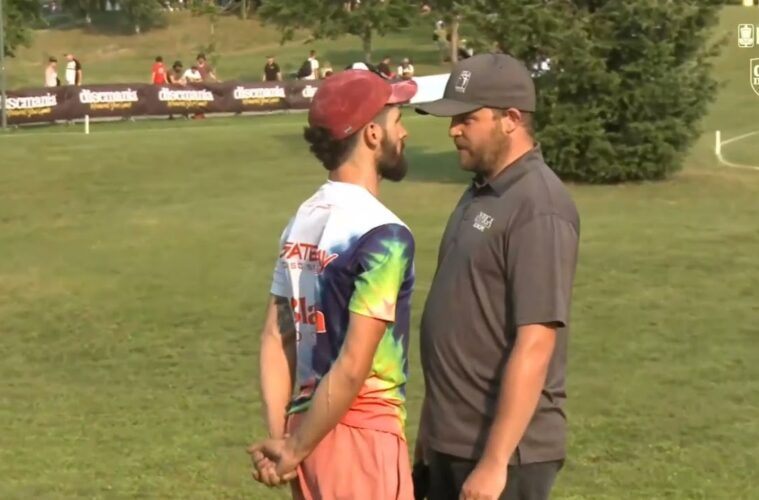 NIKKOGATE: The Case for an Incentivized Suspension

As net denizens continue to engage in puffery and pontification surrounding the actions of known wildcard Nikko Locastro, (many of them clutching their pearls as though they somehow never thought this would happen), it seems as though a vast majority are asking the wrong questions.

What the feedback loop of the disc golf internet wants is drama: Drama creates conflict, which drives engagement, which pumps out both dopamine and dollars, tricking your brain and your wallet into arguing about any ol’ goddamn thing for their own benefit.  If you don’t believe me, go find some restaurant that just announced that they went cashless on Facebook and read the comment thread, if you dare.

And so as the masses debate the surface level calamity that occurred on the one true international stage in our sport, there is perhaps a far more powerful and poignant question to be asked:  What’s next?

Nikko’s outburst, reminiscent of some of the milder outbursts of the golden era of booze-soaked baseball, has already seen disc golf’s only true firebrand disqualified from the remainder of the European Open.  One of his more prominent sponsors has issued a rather damning statement as well, which lends an air of professionalism to a brand that not only seems to disregard copyright laws with aplomb, but who also was an early innovator in adding hemp to plastic blends.

If only Innova had been so proactive when the Josh Anthon controversy erupted, (the first or the second time).

The PDGA also released a statement, and recognized within it that a reckoning was coming for Mr. Locastro, bringing us to perhaps the more cogent debate:  What’s next?  How heavy will the burden of this behavior weigh on Nikko, and are there ways to incentivize both a systemic change in the PDGA’s officiating and in Nikko himself?

There is little doubt that Nikko Locastro is going to be sent off for a considerable amount of time, but if this is done arbitrarily and without a regard for the future of both the player and the game, it will be a wasted moment.

A similarly-feisty incident between Bradley Williams and fellow competitor Matt Dollar saw the former suspended for 24 months, of which he served 18.  I’d be remiss to point out, however, that Dollar was not an official, and there are plenty of folks who can attest to the fact that the southern pro wasn’t exactly a joy to be around at times.

The rule being applied to both situations has plenty of guardrails and vagaries within it, allowing for a “potential” suspension of up to 24 months, but it also gives the PDGA discretion to issue something far more substantial as well:  A lifetime ban, which is certainly unlikely in this scenario.  (Go watch a Bobby Cox highlight reel to understand why).

But Nikko will be suspended, at least for some time, and it is imperative that he is incentivized to grow and learn from it.

Two years away from the game would be incredibly detrimental to a 33 year-old player that has been around long enough to remember a far leaner disc golf economy.  Locastro, like the rest of us, is just now seeing some viability in the sport, and to sideline him at this moment for that length of time could be a death sentence for his career as a whole.

And let’s not forget the rather sizable investment that Clash Discs, an up-and-coming manufacturer made in Locastro.  Should he disappear from the game for 2 years, (and then return diminished on account of it), there would be great trepidation among these smaller manufacturers to put so many eggs in a single basket, thus stagnating the growth of the game.

This would undoubtedly foment some resentment from Nikko as well, and for a player whose passion is often firing on the wrong cylinder, no lesson can be learned.

Perhaps the most effective and compassionate option here is to make the 24 month suspension a moving target right out of the gate, and allow Locastro to return to the PDGA after 12 months should he complete a well-defined amount of anger management counseling.   This would not only behoove Nikko, but it would allow the PDGA to maintain an air of compassion for the players – especially as we continue to see an influx of agents, managers, and representation entering the game.

If the PDGA isn’t going to take the lead on player safety and well-being, the natural next step for the professional ecosystem will be collective bargaining agreements, and I’m sure there are folks in Appling, Georgia who are already dreading that day.  This is a chance to stave off that inevitable litigious lurch, and to show that the PDGA does indeed care about their players  – something that the organization has struggled with in the past.

Otherwise, some third party will surely fill that void and create headaches for both the DGPT and the PDGA in the not-too-distant future, as the financial responsibilities continue to spread and grow.