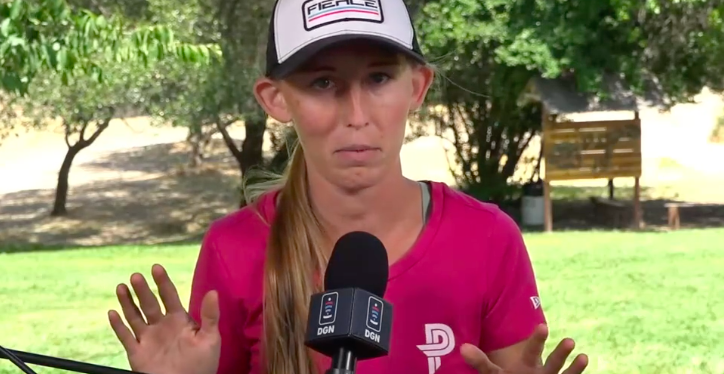 Paige Pierce Puts Her Foot Down

Diminutive as she may appear to the rest of the sporting world, when Paige Pierce puts her foot down, the disc golf community feels it.  It rattles them, and rightly so.

Pierce is as ferocious a competitor as this sport has ever seen.  She’s a shark; steely-eyed and growing tired of not feeding.  She appears to often be looking through her interviewers, ready to get back to it.

There is nary a move misplaced with Pierce, who appears to have every facet of her game, and her being, calculated out to the furthest integer.  There isn’t a misspoken syllable in the history of her time at the top of the sport, and that is as impressive a feat as any one of her otherworldly performances.

And so when Paige Pierce let the world know how she felt about the USWDGC’s issues, ears around the sport and the industry perked up.  Eyebrows were raised.  We all felt the rumble of those footsteps once again, as one of the sport’s most prominent athletes dragged the PDGA across the floor and back again.

“We play three different courses at a PDGA Major championship,” said Pierce. “A lot of us top athletes are coming straight from another tournament, where we need a rest day and a drive day, and time to learn the courses if we’re going to play to the best of our abilities.”

“My question to the PDGA is, ‘Why do you keep doing this to the women’s division?’” she continued. “The men play one course and they learn it and play it well. And the women, every year, we have to play multiple courses. And on top of that, the courses don’t close down so when we’re out here practicing, practice rounds take three, four, five hours because we’re behind a bunch of locals. This is not professionally done and I’m calling you out. Get on your stuff, PDGA. Fix this.”

Let’s just reiterate that last bit for the sake of getting this point across:

“This is not professionally done and I’m calling you out. Get on your stuff, PDGA. Fix this.”

This is Paige Pierce – the imminent FPO G.O.A.T. – using her space within the sport to not only demand change, but to command change from a governing body that is already fighting another offensive against the DGPT for control of disc golf’s future public image.

(Of course, it should be noted that that DGPT took the L a week later after failing to find a solution for live coverage of The Masters Cup at DeLaveaga).

Pierce’s USWDGC press conference reiterated her concerns, and she did so while staring directly into the camera at times – something that few of the other interviewees did, and a move that reveals just how in tune she is with her persona’s gravity within the sport.

And then, in a demonstration of her unparalleled providence and prowess, Pierce shut off this fountain of truth and diverted her mental resources into a river of birdies that flooded the USWDGC competition, cresting with a 13 stroke win for the 5’5″ giant.

The unspoken message:  Can you imagine the sort of show that Paige would have put on with a more suitable amount of time to practice?  (Or any of these competitors, for that matter?)

And therein lies the real issue – the chicken-and-the-egg dilemma as described by numerous stewards of the women’s side of the game:  If FPO isn’t executed and marketed equally, how can anyone expect it to grow equally?

Pierce very well could have given the marketing overlords of the disc golf world something truly special to use to promote the sport, had she been given the proper opportunity to do so.  Heck, anyone in that field could have created a SportsCenter highlight had they been afforded a commensurate amount of time to prepare.

Women’s disc golf competitions and competitors around the country are drowning in this flood of inconsideration, often with no Ultiworld articles to show for it and a deluge of imbecilic Facebook comments to suffer through.

But Paige Pierce is a shark, and trying to drown a shark isn’t going to do anything but piss it off.