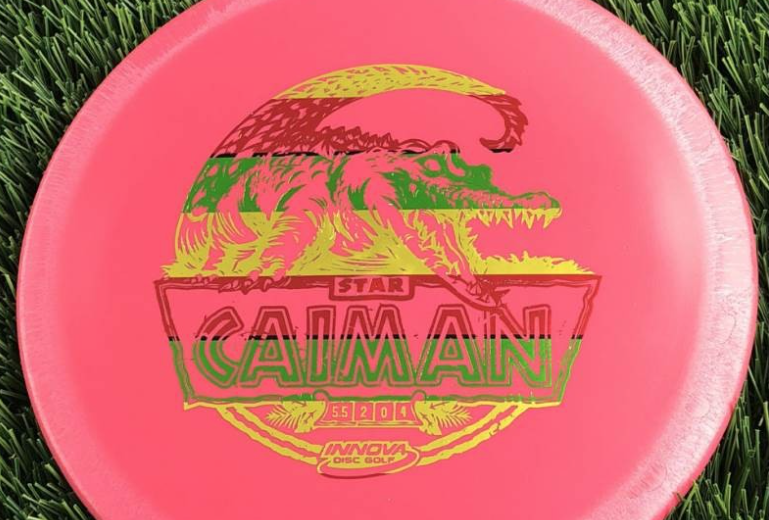 Today was one of those excellent days where the nine-to-five nonsense subsided well before the traffic in Atlanta turned into a putrid pile of egos and revenge braking.

They say that Atlanta’s rush hour lasts from 1pm to 8pm.  I think that may be just a bit optimistic.

Either way, I took a cursory look at Google Maps to see what kind of Hell I would find myself in should I brave the 4:45pm Monday rush.  As it turns out, things weren’t all that bad, and I arrived at one of the local frolf tracks a mere 30 minutes later.

The name of the game today was getting in a workout with the brand new Innova Star Caiman – a midrange disc whose name belies its ancestry in the “Gator” family of Innova’s repertoire.

Here’s what every Barney on the course is going to say:

Like, literally everyone is going to say this to you.  It’s an inevitable part of throwing a Caiman.

But here’s the fun thing about this bad boy being a “beadless Gator”:

The Gator wants to sit and bite.  It wants to find a spot next to the pin and post up.  “Gator doing Gator things” – a phrase making the rounds in this day and age of internet frolf celebrities – describes just that situation.

The Caiman, however, has a uniquely slippery afterbang.  Instead of chomping down on a patch of earth within feet of the pole, the Caiman’s smoother underside begs you to send it to the ground early and flat and let her stealthily do the work for you.  She slides on hard packed earth and well mown grass much like her namesake, imbuing this an disc with incredibly sneaky distance.

The flight is predictably overstable, as any disc bearing any similarities to the Gator should be, and comes out of the hand effortlessly.

This brings me to my only complaint so far about the Caiman:  The lack of bead and shallow rim had me releasing anhyzer shots annoyingly early.  The angle of the rim itself may have contributed a bit to this phenomenon as well, as the Caiman is made to be smooth on forehands.  When the wrist starts rolling to throw a little alley-oop on it, the grip suffers.

Will it stay in the bag?

I’d give the Caiman a 90% chance of staying in the bag, at least for a few months.  For me, it’ll replace my backup Gator, but it doesn’t quite have the confident grip I’d like to be able to remove my #1 Gator from the bag for it.

The Caiman, after all, isn’t the sniper rifle that the Gator is.  Instead, we have to think of this new offering from Innova as a tool for smooth greens and low ceilings where you need to get the most post-toss bang for your buck.