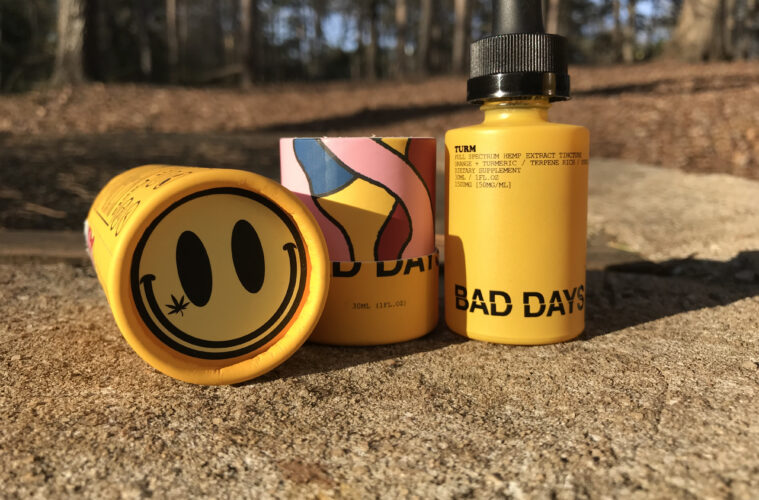 In an effort to finalize my review of the Vybes beverage from last week, I decided to visit a local shop that had the hipster wherewithal call itself an apothecary, in hopes of finding some magical concoction that would boost my creativity and whimsy – two traits that I feel have been lacking of late.

And, as I am ever the sucker for branding, I had found myself interested in the Bad Days brand before ever stepping foot into this boldly-monikered retail space.

Luckily for me, the gentleman working the counter, lonely as I imagine him to be in the midmorning on a weekday, also had fond feelings toward the brand.  This spared me that dick-ish maneuvering where I have to ask for his advice, listen to his spiel, and then pick something else based solely on the packaging anyway.

He then asked if I was interested in the 750mg or 1,500mg concentration, and my brain gave me that embarrassing “go talk to her” shove we all remember from puberty.  1,500mg it is.  If you’re going to send it, send it.

And now it is 1pm on the nose and I have plenty of “real work” left to do for the day.

0.50ml is the recommended dose, one minute under the tongue. We’ll go with that.

The taste isn’t unpleasant, but this stuff is a bit viscous.  A smidge oily. even.

There is a bit of a bite to the flavor, likely from the turmeric, but the orange notes are pleasant and earthy.  My mind immediately goes to the soft, rounded citrus flavor that you find in Earl Grey tea, but this is still quite a bit sharper than that.  The flavor of the product matches the packaging well, in that way: Overstated versions of subtle things.

The overall experience is a bit candle-like, to be honest, and I feel like the flavor is going to stick around on my tongue for a while.

Two stories down for “real work”, and I’m certainly feeling something.  It feels a little bit like a harnessable paranoia, though.  There’s isn’t some magical boost in creativity, per se.  This isn’t going to make you a maniac, rather, it’s like being the guy with his lasso around the maniac:  It demands your focus and keeps you on your toes.

But I am certainly on my regular work pace, and I’m fairly happy with the quality of the words I’m shoveling around as well.

Now that I know what to expect, harnessing this skittering energy should come much easier the second time through.

Physically, I’m feeling the cool-dryness that normally arrives when the brain has been chemically steered toward focusing, either through excess boatloads of caffeine or some prescription solution.  The tips of my fingers are where this sensation tends to be most prevalent, and so I do have to worry that there’s too much body buzz for Bad Days to be effective on the golf course.

On a scale from caffeine to Rx-style focus enhancers, the experience tends to sway a bit toward the latter, but not to any teeth-chattering degree.

I have now not only completed the regular work day, but also the Vybes review…and I don’t hate it, so that’s a plus.  I then took down some string lights, did a wee bit of gardening prep, and I still have an hour and 45 minutes until Frolfcenter kicks off.  At that point, we’ll re-up the dosage and see if I don’t end up annoying the Hell out of Scott Stokely.

No Jitters, ever, and the “come down” was so pleasant that I never really noticed it.

Now, for why you’re all reading this in the first place:  Does Bad Days have a place in your disc golf routine?

The answer is a solid maybe.

During my first testing round, a pleasant day at the home course, I found myself playing fairly well.  I had improved on an earlier-in-the-week round by 5 strokes, which is somewhere around 22 points above my current rating.  Of course, it should also be noted that I am in the midst of “dry January”, and so some of the extenuating circumstances that have impeded my progress of late are of no issue today.

Where something like caffeine would have simply made me more alert, (and thus prone to seeking too many frantic and disparate “solutions” to the woes in my game), Bad Days provided a much sharper sort of energy, and it was channeled much more efficiently than the usual iced Americano would have.

The feeling reminded me a bit of the mindless success that you may find when playing a video game while distracted by exhaustion.  Things just work, allowing your brain to handle all of the prioritization while you just do.  For a chronic over-thinker such as myself, the ease of slipping into this mindlessness was a bit of a shock.  I would have normally found a way to also worry about the naked fact that I wasn’t worrying, concerned about my own meta-mental processes and the bogey-heavy limbo that comes with that.  Bad Days gave my focus a different path to travel, and it was really more of a relief than anything else.

Somewhere around the 15th tee, we ran into some exquisite lighting, allowing me to snap this article’s cover photo.  That moment came at 4:2opm, ironically.  (Hardy har har).

All in all, for the first day of on-the-course use, I rather enjoyed it.

Just a few days later I found myself staring down a two-round practice day in nearby Douglasville, Georgia, and decided to once again give Bad Days a shot.

My combined average rating for those two rounds was only 1 point higher than my current rating, but that doesn’t diminish the sharpness I felt on the course.

And maybe “sharpness” is the prevailing value here.  I didn’t manifest better words with Bad Days, but the words available to me on any particular day came more easily and assuredly.  The same could be said about shots out on the course:  This didn’t unlock some weird Lizotte-ian wrinkle in my brain where physics are suddenly bending to my will, but I certainly eliminated a lot of low-effort mistakes and poor choices.

So, is Bad Days going in my bag?

My fear was that the aforementioned first wave of pseudo-paranoia would somehow creep into my game and force jittery, overthought errors.  I was afraid to find some downright tweak-y vibes, especially as the heart started pumping out on the course.

But no.  The physical sensations from before were quite muted as well, alleviating another of my earlier concerns.

If anything, the added stimuli of the outside world allowed Bad Days to shine.  As stated earlier, I wasn’t able to conjure anything that I didn’t already have, but my ability to get back to the right headspace quickly and without fail was notable and warmly welcomed.

My only real concern here is the viscosity of the tincture itself.  Even while being fairly judicious about handling Bad Days, I would find some residual oiliness on my person.  Holding the liquid under the tongue for the recommended minute would almost always lead to a coating of the entire inside of the mouth.  Then the inevitable licking of the lips, followed by the inevitable wiping of the face…the stuff travels a bit, is what I’m sayin’.

But this is no real issue, and the minor precautionary effort needed to prevent such a problem is completely outweighed by the benefits.

Bad Days is available online, or at a local CBD shop near you.