We’re in it now.  This is that meat on the bone that they talk about.  The last gasping stretch toward the finish line, and most of the players in Emporia are furiously rearranging the deck chairs on their own personal, proverbial Titanic, wondering just where it all went wrong.

It was a windless Emporia.  A subdued Emporia so far.  The fans were there, sure, but it felt vast and empty in the refractory period that comes after watching The Holy Shot documentary.

But Saturday should be better.  It’s the world championship round after all.  And a Saturday, after all.

And yes, I am foolishly writing this little 2022 worlds recap before it’s all over.

It’s just after midnight on Friday, on one of those late summer nights where the humidity finally backs off a bit, and it’s suddenly quieter outside, as the cicadas and other noisy bugs begin to disappear.  The insect static has been turned off, just about.

As it sits at this moment, Paul McBeth is having himself a hard time keeping up with underdog Aaron Gossage.

Three strokes separate the pair, and another two strokes from there sit Matt Orum and Calvin Heimburg.

Ricky did what he could, but all the “Whoo’s” and bucket hats in the world couldn’t get him into sniffing range of the podium.  And eight strokes is a lot to ask for at the Emporia Country Club.

Over in FPO, things appear to be shaking out like a lot of us thought they would.  Kristin Tattar, undeniably having a career-defining season, found a little space between herself and Paige Pierce, (and herself and Henna Blomroos), then turned on the jets.  The Estonian has a five stroke lead on the Fin, with Paige Pierce sitting at a lucky thirteen strokes off of Tattar’s mark.

We’re staring down a classic sports-movie situation.  This is the “bottom of the 9th, two outs, two strikes” scenario.  The only outcomes in these movies are already known to us.  Gossage won’t run away with it.  He’ll slip, Paul will charge, probably in the second half of the course, but a mental error on the last or second to last hole ends it.  It’s going to be nervy.  Probably a little hairy.  They’ll be pushing, and it will be entertaining.  But I have no earthly idea how it shakes out in the end.  To me it’s a coin toss.  So I’m going to toss a coin.

Heads, Gossage.  Tails, McBeth.  In the order they sit on the leader board.

I prefer the finger-flick into the air, catch, and then place on your arm method of coin flipping, and so my dog who just wants to go to sleep is now very confused.

Heads it is.  Frolfer Magazine predicts that Aaron Gossage wins the 2022 PDGA World Championships in MPO without a playoff.

The other side of the World Championship, FPO, seems a little more cut and dry right now.  If Kristin Tattar does not walk away the winner, there can only be one person to blame for that.  It’s a precarious position, and normally we’d point to just how steely and cold Tattar is in competition, (for lack of a better term).

But this week has been different.  Tattar is giving the world some new glimpses into the way her mind works on the course.  The putt celebrations.  The body english.  The interviews.  There’s just something else going on for Kristin Tattar this week that we hadn’t seen before.  She mashed the gas on Friday, and now she can just coast it on home.

PREDICTION:  Kristin Tattar is the 2022 World Champion for FPO with a margin of victory of 5 strokes or better.

But will someone in the field at least make it interesting?  And what of Paige Pierce, whose documentary is being shopped around to festivals and streaming platforms as we speak?  What does tomorrow hold for the most openly-driven woman in disc golf?  Does she give it a push, hang her head high at the end of it, and get back out on tour with something to prove?  Or will there be some other, less noble response?  Will she go too hard?  Could compounding desperation provide the sort of spectacle that calls PDGA Rodman back to the meme mines?

Well, since coin flips are now played out, and I don’t own a Magic 8-Ball, (and I do not fuck with Ouija Boards), we’re going to just pull up a little online Tarot card dealio and see what we get. Inevitable destruction and the breakdown of something in our lives which we consider foundational. Reminiscent of the tower of babel, which was built upon far-reaching human ambition, creating an artificial comfort in our lives. But there is always an upside – when the tower levels, not only do we uncover our own hidden resilience, but we can also rebuild anew, with greater inner insight.

Okay.  That doesn’t sound too good.  But we’re going to press on in the name of pseudoscience.  After all, look at what’s going on here.  None of this matters.

PREDICTION 2:  Someone in the field is going to make it interesting.  Maybe pull within a stroke or two.

Does Henna make a charge?  Does Salonen find her putting confidence?

[EDITOR’S NOTE:  She hits every putt she’s not supposed to make but duffs handshakes on the reg.  It’s the damndest thing.]

And let’s not forget that Holyn Handley is still lurking in there, waiting for folks to start shanking ’em OB.

RESULT: The 7 of Cups From our new pals over at Labrynthos:

A range of choices present themselves to you, some of which promise power, riches, victory and love, and others that instead present you with disaster. Danger lurks within the choices, and wishful thinking and fantasy can lead one into trouble.

Gee, that just sounds like golf, now doesn’t it.  Just choices and repercussions, and we’ve already done the math on how many of each of those these ladies are psychologically juggling at the moment.

PREDICTION 3:  Paige Pierce is going to put on a show…one way or another.

Who knows what we’re going to see from Paige Pierce, and in what direction it heads as the day wears on.  She could make a run for the podium but it’s going to take the execution of never-before-seen shot-making, and she’s not going to get away with more than 1 mistake, if that.

If things spiral early, the gallery might just get Paige putting on a show, remembering why she loves disc golf in the first place.

But if Pierce rattles off a couple of special shots on a couple of consecutive holes, that’s the sort of momentum that could see her careening toward a stalling Tattar, setting up the perfect ending for her documentary season.

RESULT: The 4 of Wands 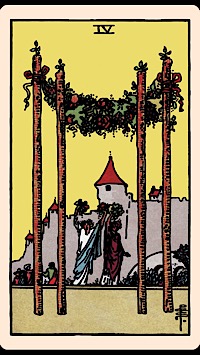 Hit me one more time, Labrynthos:

A celebration of harmony, happiness and good relationships. It is a time of peace after a period of hard work. The four of wands usually indicates this in regards to family and large groups of people.

Sounds like Paige Pierce is going to do just fine, even if she’ll to have to wait to claim that distinguishing, (and nigh inevitable), 6th world title.